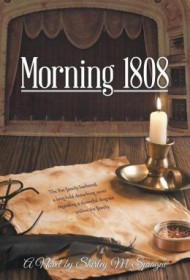 This slender volume by Shirley M. Sprague purports to be a novel that clarifies the parentage of Edgar Allan Poe. In reality, it presents a compilation of research about Poe’s mother Betty Arnold and her days with various fledgling theater groups in the late 18th and early 19th centuries.

The first chapter briefly details the determination of Charles Powell to establish a theater in Boston and his recruitment of a London theatre troupe to appear in his productions. Among this troupe is Mrs. Elizabeth Arnold and her young daughter Betty, who has her own theatrical ambitions.

As Elizabeth’s star brightens, David’s dims, causing tensions in the marriage. Although John re-enters Elizabeth’s life, he follows his own path to glory and offers no support when David disappears and Elizabeth becomes ill. Sprague conjectures that John fathered Edgar Allan Poe, citing as proof his proximity to Elizabeth and a secret packet of letters between them that passed through various hands after Elizabeth’s death.

The book offers interesting historical nuggets, noting, for example, that early stages were lit by candles, a reality that proved deadly to Betty’s mother, who perished after her costume caught fire one night.

Unfortunately, stilted language, flat characterizations and the author’s tendency to tell about events, rather than show them, hampers the narrative, as does the abundance of convoluted and ungrammatical sentences: ”Many Theaters [sic] were completely destroyed by an upset candle somewhere in the Theater [sic] afire and completely engulfing the Theater [sic] too quickly out of control.”

This work resembles a research paper. As such, readers will learn about Edgar Allen Poe’s mother and the theatrical era. But those seeking a vibrant, layered novel would do best to look elsewhere.