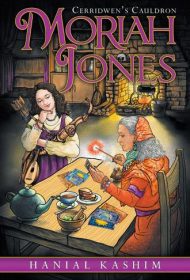 In this YA fantasy novel, 15-year-old Moriah Jones sets off on a quest to save her best friend Gwendoline.

Moriah is a half-fey, half-human being. When Gwendoline is abducted, Moriah’s grandmother’s tarot reading tells Moriah that to save Gwendoline, she must find Cerridwen’s Cauldron, the Font (sic) of Knowledge and Wisdom, which hides in the world of dreams.

Her mission won’t be easy. Mortal and fairy worlds are in turmoil. In the human world, King Arthur reigns, but unscrupulous knights war with each other. In the fey world, Queen Mav (possibly an error; in British folklore Queen “Mab” is commonly used) rules, but she faces threats from the Lunar Shadow unleashed by Gwendoline’s abductor and a portal between worlds that can’t be closed.

When Moriah finds the Queen both a help and a hindrance, she turns to King Arthur’s fabled magician, Merlin, to guide her to the magical cauldron and release the power she needs to succeed.

In the tradition of quest-based, coming-of-age fantasy novels, Moriah is brave but volatile, struggling to accept her growing understanding of the world around her. The story has a clear arc and works as a stand-alone novel, but with series potential.

At times, the amount of world-building and fantasy elements overwhelm the narrative. Kashim includes dark and light fairies, pixies, fauns, centaurs, golums, and gypsies, mixing elements of astrology and Arthurian legend with magical stones, weapons, potions, and portals. The tone is also uneven, veering from high fantasy to modern; for example, the author writes that “Moriah’s mind was in a whirr at the radiant beauty of this bronze-skinned cutie.”

Other issues include overuse of adverbs and dialogue tags and Moriah’s internal dialogue, which too often slows the pace at times of high drama; for example, “Without a word, she gave action to the fresh idea that had come to her.”

Such drawbacks will deter many readers. However, this novel could appeal to fantasy readers seeking strong female protagonists.