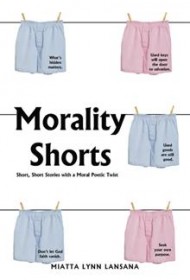 Miatta Lynn Lansana, the author of this collection of moral fables, has taught Sunday school for several years and battled both depression and disability. Her intent with the stories is to inspire readers to think, or rethink, their morals. That’s a commendable goal, but the execution hits a few snags along the way.

Some of the stories feature a twist at the end, as in one about a racist policeman who doesn’t realize he’s beating his own son, who has put on blackface as a joke. That’s a highly unlikely scenario, but the intent is clear. Other stories aren’t as clearly plotted. In one, a girl skips school and goes to the mall, where she’s sexually assaulted in the parking lot and ignored by shoppers. This is appalling to read, but it also seems a wildly disproportionate punishment for truancy.

The stories have one more stylistic quirk in common: They’re written in a rhyming cadence. “The more she thought the worst she got; a fool on a mission was her only plot.” Leaving aside that the sentence makes little sense, the rhymes here and elsewhere become tiresome.

Morality Shorts also needs a thorough edit for spelling, grammar and punctuation. Reading the word “anode” and then having to reread to understand that the author meant “annoyed” pulls the reader out of the story.

Lansana’s intentions are good, but for Morality Shorts to affect readers, it must be much more clearly written and the punishments meted out should fit the crimes, small and large, that they are meant to avenge.