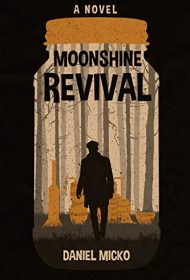 Kincaid, Georgia, is home to the Kincaid and Spicer families. In 1888, town founder Terry Lee Kincaid Sr. (“Big T”) starts a moonshine venture with Jim Spicer, a black man. Their business provides income, allowing Big T to pay off the Klan, which disapproves of the racial interactions in the “ice cream land” of Kincaid: “The only place in the world where vanilla and Chocolate [sic] got mixed.”

Over the years, the two families become increasingly intertwined. Little T, Big T’s grandson, chronicles the families’ relationships, revealing secrets and righting reputational wrongs. Little T acknowledges his family’s Klan ties but asserts that “The truth is that everyone who lived in Kincaid was family.”

Micko, however, convincingly depicts the threat white supremacists pose. His engaging characters wrestle with their places in the world, seemingly predetermined by race and social status, presenting societal concerns still relevant and examining how far one might compromise one’s values to avoid harm.

Through Micko’s writing style and Little T’s research into his family’s past, the narrative reads like an oral history, providing an authentic air but also presenting problems. Micko effectively employs colloquialisms and Southern vernacular, where final letters of words are often dropped, but he uses too many asides, including needless definitions and excessive reminders of characters’ relationships. Portions of the story are redundant; others veer into unnecessary directions.

In the prologue, Micko states that he rewrote the original book to change it from being “muddy, an oral script by a character” to an omniscient perspective. Unfortunately, he wasn’t consistent, and much of the writing remains from Little T’s point of view.

Those who can overlook the repetitive and meandering prose will find this an interesting foray into the impact of race relations on individuals and a community.