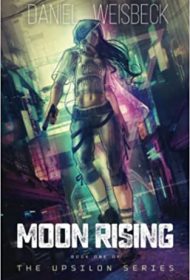 The first installment in Daniel Weisbeck’s Upsilon saga is a pedal-to-the-metal futuristic thriller that puts an interesting spin on the science fiction trope of lifelike androids developed to enrich human lives (e.g., Asimov’s I, Robot and Dick’s Do Androids Dream of Electric Sheep?).

The brilliant opening sequence hooks readers immediately with intensity and dark mystery. A girl, apparently kidnapped, is trapped in a man’s basement. He makes her wear clothes she assumes are his dead daughter’s and at the same time every day, he descends the stairs and watches her in brooding silence before turning out the lights and relocking the door. She is plotting an escape when, shockingly, her teacher descends the stairs with the man. “Teacher,” the girl calls her, is arguing with the man, who wants her to “fix” the girl.

The girl, we learn, is an android made by Nomad Robotics, a corporation creating the most convincing humanoids on the market. Teacher – Dr. Bobby Houndstooth, head of anthropomorphism at Nomad – believes the man is sexually abusing the android, called Silon, and risks her career to save her. Once free of the man, they flee.

Houndstooth suspects that the android is sentient, which would be the “greatest discovery of humankind,” and realizes that Silon is key to a conspiracy that could irrevocably change the world.

There’s a lot to love here. The writing is laser-focused and fluid, the characters insightfully portrayed and realistic and the pacing relentless. The novel isn’t without flaws, however. One fundamental expectation of science fiction is rich and deeply contemplated world-building (scientific advancements, cultural changes, political shifts, etc.); here, world-building is superficial at best. Other than radically advanced androids, the only marked difference between the modern-day world and Weisbeck’s future circa 2084 is flying vehicles. Science fiction fans will expect more in future installments.

That said, Silon and Houndstooth are a dynamic pair with overwhelming potential. This could be the start of an amazing science fiction series.