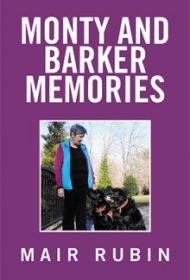 More booklet than book, this short tale pays tribute to the service dogs who have brightened the author’s life.

Diagnosed with multiple sclerosis in her 20s, author Mair Rubin, now 66, was matched with Monty, a black Labrador service dog, in 2008. Until Monty appeared, she writes that she’d become “almost a hermit” due to the embarrassment over her need to use a “rollator,” a walker with wheels and a seat. But after Monty came into her life, Rubin began going out again, as bystanders eyes were drawn to the “beautiful” dog instead, and Monty attracted questions from  people curious about the dog and his services.

After she began talking about Monty and the Saint Francis Service Dogs organization to formal groups like the Girl Scouts, and informal gatherings of curious people who collected around her at places like Walmart, Rubin became the subject of TV and newspaper interviews. Once Monty retired, she was matched with a new black Labrador, Barker, and their public service educating people about service dogs continued.

Mair writes that she shares the stories of her beloved service dogs “to let the disabled public know that they can apply with an organization that is certified, and eventually get a dog of their own…” In this brief selection of stories, she achieves that goal and inspires a few chuckles at some of their antics.

The stories, however, would greatly benefit from an edit. Characters appear with no introduction or explanation of who they are. The chronology can be hard to follow, and memories, such as the “cheese fiasco,” are referred to with no explanation until later of what the fiasco was.

Nonetheless, there is good information here about service dogs and the process of being matched with one. The book is likely to be appreciated by Mair’s service dog family and friends and by patient readers willing to persevere through sometimes-puzzling prose for information about the service dog community.