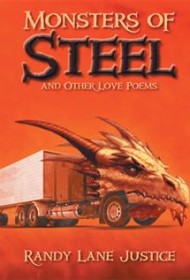 Big rigs, machines, power tools, tennis shoes, and beer aren’t the usual topics explored in poetry books, but in Monsters of Steel and Other Love Poems, these manly subjects come under the author’s scrutiny. A hint of humor and male bravado blend to portray Randy Lane Justice’s take on life and love.

Justice begins the first poem (from which the collection gets its title) with this line: “I am a man in the world of manly things.” Indeed, his perspective remains consistently masculine, even when exploring the voice of a writer in “Mine Alone” and “Child of Creativity” and the perils of humanity in “Yellow Light Day” and “Life’s Balance.”

His observations feel unrehearsed and authentic and often venture beneath the surface to explore his feelings and perceptions. The poetic style includes rambling free verse, rhymed couplets, and combinations of the two. Language varies from the mundane (“Later, you lie awake in bed, / (after getting up to pee, which is, you guessed it, yellow)…”) to the poetic (“Hope had been gently cradling my heart, / but then spread it’s [sic] talons and crushed it!”) to the sophomoric (“There once was a man named Fred/who was a little silly in the head/ he loved spaghetti/and being called Freddy…”).

Errors in punctuation, grammar, and spelling in nearly every poem detract from the overall effect, although the individual poet’s voice remains strong and unique. In “Mine Alone,” he writes about his fear of being influenced by others (apparently teachers, editors, and other poets): “To learn from reading, seeing, and hearing, in the professional form, / may be quick to set me on a path, of which there may be no / return to my own form?” Justice need not worry about losing his voice or style through education. Attending writing classes, workshops, and critique groups would help him refine his poetry and make it more enjoyable for readers.