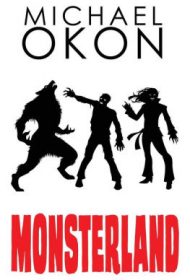 With a tone and narrative content that should appeal to young adult and adult readers, Michael Okon’s Monsterland is a page-turning fusion of fantasy, horror, and apocalyptic fiction that follows high school senior Wyatt as he and his friends secure tickets to the grand opening of a revolutionary theme park featuring real-life monsters.

The story is set in a near-future where a pandemic has turned much of humanity into zombies (the politically correct term is “vitality-challenged”) and devastated world economies. Stepping forward as a potential savior is Vincent Konrad, a man who has gathered all remaining plague victims and housed them inside seven Monsterland theme parks worldwide, all set to open on the same day. Konrad has added to the mix werewolves and vampires he has captured from their dwindling populations and plans to revitalize economies globally through tourism while also striving to find a cure to the dreaded disease.

When Wyatt and his 14-year-old brother get a once-in-a-lifetime chance to attend California’s Monsterland opening ceremonies, Wyatt’s mother reluctantly allows it, mostly because their stepfather Carter, a local policeman who loves the boys like his own, will be working security. But the situation turns nightmarish when the monsters free themselves and Wyatt and crew become entangled in a struggle for survival and a grand-scale conspiracy that could change humankind forever.

Although the storyline following the group of teens embraces more than a few worn-out stereotypes—the meathead jock, the weirdo introvert, the unlikely relationship between the popular girl and the nerd, etc.—the overall narrative works largely because of the realistic and emotionally intense bond between Carter and his stepsons. Secondary characters that are werewolves, vampires, etc. give the novel cool, dark fantasy atmospherics. The conclusion satisfies, although the novel feels like the foundation for a much bigger adventure to come.

Teen themes blended with a bevy of monsters makes this a fast-paced, fun read: The Breakfast Club meets The Walking Dead.