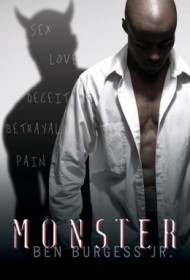 In this engaging novel of one young man’s quest of self-discovery, protagonist Ken Ferguson has all the trappings: beautiful women, a flashy car, designer duds and the upscale condo. At heart, however, he is an empty man, set on a course destined for pain.

Monster begins when the woman Ferguson hopes to marry dumps him. Initially shocked and heartbroken, Ferguson soon hardens his heart and embarks on a journey of sexual conquests that include innumerable one night stands, relationships with a handful of besotted women and even a foray into prostitution. Meanwhile, as he climbs the ladder of success, he watches his mother suffer at the hands of a philandering husband, never realizing how much like his father he has become.

In a conversation with his best friend, Adam, Ferguson tries to explain his callous behavior:

“ ‘How do you have relationships with all these girls and feel … feel nothing?’ Adam asks.…

“ ‘How can you be intimate with a woman and not care?’ his friend asks.

“ ‘Feelings get in the way,’ Ferguson explains. ‘Having feelings can get you hurt …’

This is a skillfully developed tale with likeable characters, including the broken Ferguson, a well-paced plot and pitch-perfect dialogue. The explicit sex scenes can feel over the top, and Burgess would do well to temper his use of adverbs — “kissed deeply,” “kissed wildy,” “moaned gently” — and hone his editing skills to catch occasional errors of punctuation.

Nonetheless, this is a satisfying read, and while the graphic sex may put some readers off, the book’s well-rounded story should be enjoyed by a wide audience.