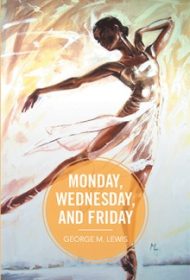 The title of George M. Lewis’ novel represents the difficult choice its protagonist ultimately faces:  As a college senior, Camy devotes Mondays, Wednesdays, and Fridays to ballet and Tuesdays and Thursdays to her other passion, physics. Which will prevail?

Camy’s affinity for classical dance comes from her mother, Marilyn, a white Englishwoman, once a prima ballerina in London. Marilyn is determined that Camy, the product of her marriage to an African-American scientist who died when Camy was four, will be the first mixed-race prima ballerina in New York City and demands Camy drop physics to meet the challenge.

Camy accedes, but remains on an atom-smashing project with her advisor, Dr. Carson Bell, a distinguished black professor. As Camy pursues her ballet ambitions, facing racism and a troubling revelation about her mother’s meddling in her dancing career, she also advances in physics. When her mother finally gives Camy her father’s papers, Camy finds a handwritten sequence of 12 equations and recognizes their relevance to the God Particle (aka Higgs-Boson).  She continues the sequence, presenting her finding to her physics professors: that the underlying principle of the “invisible power that allows everything to co-exist” is Forgiveness.

Patient women’s fiction readers will sympathize with Camy’s conflict between art and science, her loyalty to and frustration with her domineering mother, and the questions she has about her identity. They will also be happy for Camy’s triumphs on stage, in the lab, and in love.

But many readers will be distracted by the typos, grammatical errors, and technical mistakes throughout. The most serious, in light of Camy’s strengths in physics and ballet, is the misuse of “Noble” for “Nobel” and “Caraboose” for “Carabosse.” Additionally, no one serious about physics will accept Camy’s theory based as it is on spirituality, not empirical evidence.

While Camy’s struggle is narrated in an entertaining way, the story requires more technical polish and revision regarding the scientific element in order to fully satisfy readers.