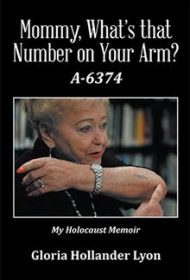 In this engrossing memoir, Gloria Hollander Lyon recounts her harrowing experiences during the Holocaust as a cautionary tale for future generations to remain ever vigilant against racism in a changing world.

Lyon, born in Czechoslovakia, enjoyed an idyllic childhood until 1938, when Hungary invaded. The eight-year-old had to adapt to a new language, school, and even Hungarian first name: Hajnal (nickname Hanci). After years of increasing anti-Semitism in German-aligned Hungary, the Nazi soldiers arrived in 1944 to round up the Jews. Hanci, then 14, survived seven concentration camps, including Auschwitz-Birkenau. In an ironic twist, while she eventually emigrated to America, her surviving family members returned to their homeland, only to be trapped behind the Iron Curtain.

Lyon presents the book in a straightforward, chronological style with the kind of details that will leave readers aghast at man’s cruelty to man. At one camp, a prisoner suffering from dysentery rushed to the latrine against orders, was beaten and found the next day drowned in the latrine. The body remained there for three days as a warning. The camps took their emotional and physical toll on Lyon (who eventually adopted the American first name Gloria). In later years, she endured 20 surgeries for back and neck problems from fragile bones. Still, she never abandoned her Jewish faith and became an activist reminding people of what can happen even in a supposedly civilized, educated society.

Even those familiar with the Holocaust will find Lyon’s book a stand-out. She gives historical context, humanizes the story’s victims with family photos and pictures from the U.S. Holocaust Memorial Museum, and documents her chilling return to the camps and her childhood home 47 years later, even finding the culvert where she had hid naked and shivering from the Nazis for two days, after a brief escape.

By skillfully recounting her experiences, Lyon has created a touching tribute to her courage and a compelling call to action for the need to vanquish hate.