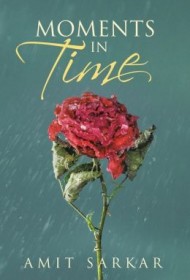 Memoir can be told in a linear fashion or just capture snapshots of moments in someone’s life. In Moments in Time, author Amit Sarkar offers the latter (as the title indicates), against the backdrop of World War II and the division of India and Pakistan. It’s his story, but also a story of the “partitioning” of India and the influence British rule had on the country.

Opening with a story of his first solo train trip to Calcutta for school, Sarkar captures details such as the stations thronged with vendors and an older passenger who takes him under his wing, then quickly proves annoying. In another chapter, a young Sarkar asks his grandmother to tell the story of her wedding, and her tale of an arranged marriage at a young age is a blend of opulent beauty and the sinister realization that the remainder of her life had just been decided for her without consent or consultation. On the wedding day, friends rush in to hug and greet her, but she can’t go out to play with them anymore. This foreshadows a few of Sarkar’s own early romantic fancies, which terminate when the girls he has fallen for have already been promised to someone else.

Sarkar’s eye for detail is always sharp, from the men rolling bidis (cigarettes) under a tree, to the speakeasy hidden behind a liquor store that a friend drags him to and its surrounding riverside neighborhood. The sensory details pull readers into the story. The tight focus on the everyday against the backdrop of history drives home how daily life must flex and bend to outside circumstances.

At first glance, Moments in Time seems like a generic title, but it’s very apt. These stories, vignettes and observations each depict moments in time that, taken together, create a vivid portrait of life in India at a time of great changes.

BlueInk Heads Up: This book balances personal stories with the history happening around them so skillfully that it could be of use to historians and memoirists alike.