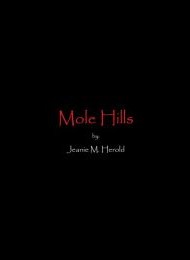 Jeanie M. Herold writes in her Author’s Note, “The lens and the pen have become a kind of home to me.” She recounts how following the deaths of her parents, she began taking photographs and “thinking in rhyme,” which resulted in the series of interspersed poems and photographs that comprises her ebook, Mole Hills. In her dedication poem, “The Window,” Herold seeks to articulate the importance of moving on from grief in a spiritual quest for God and inner peace: “doors have to close for wings to be spread/ […] So don’t stare at the door, look for the window.”

The greatest appeal of Mole Hills is the photography. Herold’s photographs are frequently breathtaking in their vivid color and attention to detail. Her poems are often ekphrastic, corresponding directly to “This Old Bridge” or “pretty little redbird” from the preceding image. This exploration of the relationship between image and text is compelling in theory, but the poems do not match the images in precision and nuance. They are typically broad and offer overly familiar material, such as pairing the idea of a rainbow with a pot of gold, the human spirit with wind and flight, the dove with freedom, the rose with “petals spread wide” and “beautiful bloom.” The line “a cool mist fingering the forest” from “The Silencer” is a rare example of more powerful written imagery that engages the reader’s senses.

Given the loftier themes and more formal language of these poems overall, the reader is likely to be jarred by the refrain “needle in my ass,” which appears in several variations in the poem “R.E.M.” Likewise, in the poem “I Mowed the Lawn,” the couplet “Stepped in poop/ It stunk” undercuts the poet’s established voice and tone.

While the author’s poems do not possess strong literary merits overall, her lovingly produced volume is likely to be enjoyed by habitual readers of the inspirational, religious, and self-help genres.