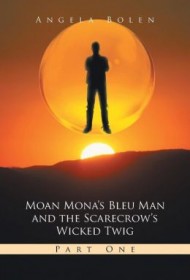 This 84-page novelette is a whimsical but flawed fantasy about a benevolent witch and her battle with a wicked wizard to save a community of innocent mortals.

The story chronicles the adventures of a witch named Moan Mona and her love interest Jaw Paw, a scarecrow turned human. It follows their struggle to defeat an egomaniacal sorcerer named Bo Top, who wants to destroy all of the mortals who live on Plum Island and eventually rule both the magical and mortal realms.

The plot has the potential to deliver a quirky little story that appeals to all ages. Unfortunately, the narrative’s conspicuous lack of editing and proofreading has made this story an exceptionally challenging read — one overrun with grammatical errors and poor sentence structure. (There is even an apparent mistake in the title on the cover. “Bleu Man” is subsequently referred to as “Blue Man” throughout the story.) The grammatical mistakes and awkward sentence construction make this not only a frustrating read but also, at times, undecipherable.

Here are two examples indicative of the overall reading experience:

“ ‘Tomorrow will be the worse!’ Simon recollected. ‘Sydney nodded.’ Mama’s birthday is always the worse!’ Agreed the twins.”

And: “But, nor had Bo Tops’ true thoughts! Snubbed Moan Mona.”

Sadly, underneath all of the mistakes is the glimmer of an interesting storyline; anthropomorphic characters such as Wicked Twig and Mister Stone and the narrative’s fanciful undertone could easily draw comparisons to L. Frank Baum’s Oz saga if the writing were improved and the hundreds of errors corrected.

With so many issues, though, it’s impossible to recommend this book as it stands.