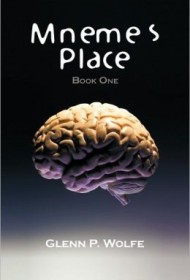 When retired Hollywood scriptwriter Glenn P. Wolfe succumbed to lung cancer in 2007, at age 81, he left unfinished this wildly inventive story about the tricks of memory and the emotional tug of baseball; about comic folly in a disorderly family, the neuroses of showbiz folk, and the glories of language itself. There’s so much energy and wit in “Book One” of Wolfe’s incomplete magnum opus that even its intermittent shortcomings–repetition and verbal excess–feel like blessings. Absent an ending, the tale still satisfies.

The title derives from the Greek goddess of memory, Mnemosyne, who is also the mother of the muses. For Wolfe, Mneme’s Place is an imaginary saloon and region of the mind where his hero, a beleaguered TV writer named Ralph Jonas, takes refuge and takes stock. Installed at the bar, Ralph talks and drinks with generations of ballplayers (he is the worried manager of two mythical all-star teams–one Polish, one Jewish); with former writing partners on everything from Perry Mason to a Jack Benny comedy special; with long-dead ballet dancers, neuroscientists and great authors and their characters. Even the inventor of the flush toilet drops in.

Memory rampant, Ralph also reconsiders his crazy family back in Wisconsin (Wolfe’s home state), his childhood terrors and the history of language. Adept with neologisms, wordplay and dialects–Polish, Yiddish, Irish–Wolfe directly acknowledges his debts to Joyce (“Oh, may the saints pieservice, Mr. Daly,” he puns), and the Nabokov of Speak, Memory seems present. As for Jonas’/Wolfe’s obsession with the national pastime, it brings to mind Robert Coover’s haunting meta-fictional fantasy The Universal Baseball Association, Inc., J. Henry Waugh, Prop.

But in the end, Wolfe’s hilarious, mournful, restless voice is all his own, speaking for his vivid creation and apt secret sharer: “His Immanence, Ralph Jonas. Lost in the woulds. Memory in runes.”