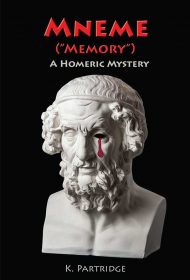 Mneme (“Memory”): A Homeric Mystery, written by K. Partridge and illustrated by Barbara Harvey, expertly melds the mythology of ancient Greece with the modern attributes of a whodunit.

Taking place more than 400 years after the Trojan War on the island of Chios in the Aegean sea, Mneme chronicles a mystery surrounding Homeros (Homer), the composer of The Iliad and The Odyssey. The novel begins with Homeros awaking from a fall that erases his short-term memory and induces aphasia, a brain injury that impedes his ability to speak clearly. Hampered by these disabilities, he must connect the fall to an unsolved murder mystery involving the deaths of his wife and a rival bard.

The novel alternates between Homeros’s present and past. With the help of his daughter Calliope and a sympathetic goatherd Dolios, Homeros unravels a complicated plot, interwoven with his composition of The Odyssey and the mythology of the “Hellenes” (Greeks), which concludes with an explosive ending.

Partridge excels at placing readers in the Hellenistic world of 750 BCE. The inclusion of ancient Greek terminology (detailed in a glossary at book’s end) and illustrations of significant period relics enhance the reader’s experience. For example, the author’s description of Homeros needing his simple woolen garment, a “chitoniskos,” to survive the winter because “new wool was dear,” is both historically accurate and captures the gritty reality of life on Chios.

Partridge crafts intriguing characters, especially that of Homeros, and creates parallels between the personalities of Odysseus and Homeros by intricately weaving Richard Lattimore’s translation of The Odyssey into the text. For example, Odysseus is an adulterer who ultimately returns home to his wife Penelope, just as Homeros is an adulterer who stays true to his murdered wife Eriphyle.

With this imaginative work firmly embedded in the historical reality of the period, Partridge is sure to intrigue casual mystery readers and aficionados of Hellenistic culture alike.