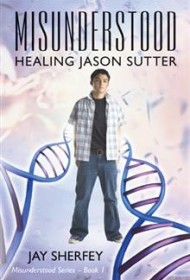 In 1962, in a suburb of Philadelphia, Jason arrives at a new foster home. His foster parents, Frank and Lydia Dubois, game the foster care system, taking in the most damaged kids and selling the medicine they are prescribed. Jason’s out-of-control behavior is a result of the overwhelming sensations his telepathic powers cause.

Slowly, through bonding with his foster sister, Suzy, his classmate, Russ, and a group of adults that includes a science teacher, the town librarians and a Taiwanese agriculture professor, Jason begins to understand his powers and use them in positive ways – and discover that there are others like him. But a darker force, known as the Community, is eager to harness Jason’s abilities, forcing him to protect those he has come to care about by making a difficult choice.

Misunderstood: Healing Jason Sutter is the first book in a series, which makes some vagueness in the plot, particularly surrounding the Community, understandable. Still, the book feels thin. Sherfey introduces new characters and plot complications at a rapid clip that too often forsakes details and development that would engage young readers. (There are a few welcome exceptions, including an argument between Russ and Jason over the hardness of a chair, a budding romance between one of the librarians and the science teacher and Frank’s developing sense of compassion.) And, though it’s a historical novel, Misunderstood offers little to no sense of the early 1960s.

Though Misunderstood has some appealing moments and a high-concept premise, it lacks the heft to stand out in the crowded YA paranormal/fantasy field.