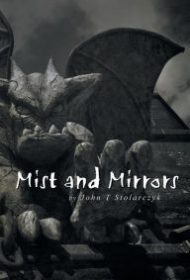 Australia-based author John T. Stolarczyk shows a knack for evocative writing in Mist and Mirrors, a collection of short stories rooted in a world of fantasy, magic and mystery.

In these 11 vignettes, Stolarcyzk sketches out a fantasy world populated by warriors and wizards, monsters and mages. Employing a crisp and well-honed narrative style, Stolarcyzk tells stories that revel in the most classic cues of the fantasy genre. It’s a fictional universe that mixes the gritty immediacy of George R. R. Martin’s Song of Ice and Fire series with the fantastical elements of J.R.R. Tolkien and Robert Jordan.

For example, the author’s detailed descriptions of battlefields, taverns and other locales summons the dedicated realism of Game of Thrones, while his imagined cities and fantastic characters recall the imaginative breadth of The Lord of the Rings series. One story details the journey of a type of magician called a Deathseer and his apprentice; the pair runs into ghosts and mystical forces. In another, the author employs a first-person narrative style to spin a story of the ghosts of long-dead knights enacting retribution. A long-abandoned city serves as the central character of another short story.

All of the separate tales share Stolarcyzk’s skill for strong imagery and vivid description. Despite that talent, however, the short span of the stories makes it difficult to feel completely invested in any one character or any single conflict. The scope of the author’s imagined fantasy world is impressive —from powerful wizards to a carefully constructed geography — but the brief format of the book prevents any real depth from developing. Characters, conflicts and locales never have a chance to fully develop in this slim context.

Even so, Stolarcyzk succeeds in creating genuinely eerie and arresting moments in the vignettes. Thanks to a strong narrative style and well-edited prose, the author offers a pastiche of engaging stories pulled from another world. Though brief, this collection should appeal to  well-versed fans of the fantasy genre.