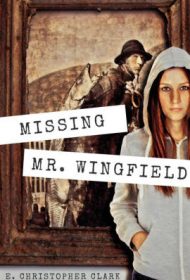 In this transformative debut novel, E. Christopher Clark weaves a quixotic and engaging literary tale surrounding a young mother who revisits the memories of her past to confront her life choices and ponder the “what ifs?”

Eight years have passed since Veronica Silver’s high school pregnancy and the subsequent birth of her daughter Tracy. In the aftermath, she struggles with the idea of leaving her husband and their loveless marriage to be with the woman she loves. Under the shadow of her father’s refusal to reconcile the fact that both his son and daughter are gay, Veronica and her partner Desiree move to a family house on the Cape. Here, the smart and gifted Tracy strives to retain her emotional footing above fractured family ground.

In a traditional sense, the story is about character interactions and family dynamics. But what sets it apart is the unique, inventive format in which the narrative unfolds. Through creative use of flashbacks, letters, hallucinations, and imaginary dreamscapes, the author reveals the consequences of his characters’ choices.

Early on, for example, Clark manifests a haunting subway scene where Veronica envisions her earlier teen indiscretions. Later, a barn on the Cape property transforms into a bizarre theatrical setting, ensconced in vivid female fantasy characters. Like a trip down the proverbial rabbit hole, Tracy rules as judge and jury in a trial against a beloved uncle she feels has committed “Crimes Against Feminism.”

The pointed use of a New England backdrop informs much of the family history and narrative. From a lesbian aunt who penned pin-up cartoons of the 1940s, to revelations of an ancestry involved in witchcraft, carefully chosen details bring depth and nuance to Clark’s artful vision.

The author offers choice references to the well-known memory works of Charles Dickens and Tennessee Williams, and the influence of such great writers seems duly appropriate. With his impressively honed craft, Clark has produced an equally compelling literary draw.