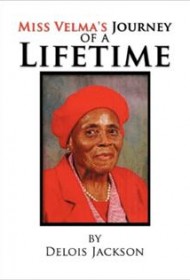 Delois Knox Jackson’s entertaining memoir packs an emotional punch, viewing a turbulent period of American race relations mostly though the eyes of her nonagenarian mother, Miss Velma. These are the stories of country folk, who grew up on a Southern farm in a hard-working family surrounded by a host of relatives but little money.

Miss Velma’s maternal grandfather, Henderson Tuggles, was enslaved and brought from Africa at about age seven. Sold to a white Mississippi plantation owner named Tuggles, he worked in the household for several years. Once freed, he packed up his young family and moved to historical Crowley’s Ridge in Arkansas, staking a claim on a piece of farmland, which nurtured the family until Tuggles and his wife died in 1937.

Married and a mother by age 20, Miss Velma and her husband William first lived with her parents, later building their own house nearby. As had their mother before them, the older of her four children babysat the younger siblings, did chores, and all the children, when old enough, worked the fields alongside their parents. While segregation and discrimination didn’t legally end until daughter Delois was a teenager, personal accounts of racism are balanced by joyful memories, such as Miss Velma and Delois winning ribbons every year at the state fair.

Miss Velma credits her Christian faith with helping her through life’s tragedies, including four miscarriages, as well as bestowing blessings. By age 93,when her story was published, she had realized her lifelong dreams: to open her own bank account; to vacation in Hot Springs, Ark., and to publish a book about her life. Jackson’s expressive writing is consistent, clear (with a few charming malapropisms, such as “bow weavers” for “boll weevils”), and easy to follow. Miss Velma’s memories are likely to appeal to readers interested in this period of American history and how former slaves and their descendents carved out lives of their own.