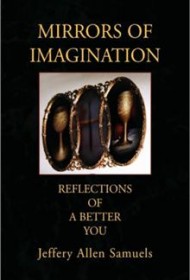 Mirrors of Imagination by Jeffery Allen Samuels is a daybook of affirmations. Each poem offers a bit of friendly advice or a gentle warning. Because faith clearly informs this book, it has the feel of a homily. Like good sermons, Samuels’ best poems use everyday references to contextualize common problems. For instance, “The Game of Love” develops an extended metaphor using basketball:

“Understanding” conceptualizes an abstract term using a concrete image: “Put the receiver on the hook but keep the two way open.” And “Pass It On” develops its message via a card game: “There is only one hand and God won’t deal it twice.”

Although attractive to poets because it offers a ready set of images and messages, religion can sometimes appear heavy-handed in verse. That’s often the case here, made slightly less so because this volume lends a human flavor to doctrine. If “Because the spiritual is first” sounds didactic in “Marriage 101,” then at least the poet makes room for human behavior: “and what’s natural comes next.”

Sometimes it feels as if Samuels is straining to retain a rhyme scheme, which can lead to dense and convoluted constructions, as in: “Therefore today has come at now’s expense to honor the things he did” in “Pops.” While the poems aren’t entirely successful in print, however, it’s easy to imagine them as effective spoken word performances, where the poet’s passion and engagement with his audience would take center stage.