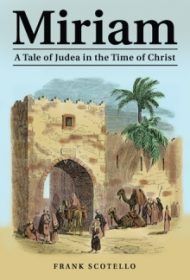 Frank Scotello’s Miriam is an intriguing tale of a Jewish girl, Miriam, who lives in Israel during the time of Christ.

Miriam is a devout Jew who works with her father selling fruit and nuts in the market. A Roman centurion, Gaius Fabius, frequently stops by to purchase goods and sweet-talk Miriam, but Miriam rebuffs his attentions, since Jews naturally despise the occupying Romans.

Miriam embarks on a cross-country journey with a friend, the friend’s brother Jacob, and the friend’s mother. Along the way, the group witnesses a Roman skirmish and Miriam recognizes Gaius, injured in the battle. She chooses to nurse him back to health, then falls for the Roman and unwittingly becomes involved in a love triangle between herself and Gaius and Jacob. Miriam must choose between Jacob, the nice Jewish boy, and Gaius, which will mean rejection from her family.

The author brilliantly weaves in mention of characters from the biblical era—Jesus, John the Baptist, Pilate, and King Herod—without allowing them to usurp the unique story of the girl Miriam. Even more delightful is how Scotello has Miriam play a part in two well-known biblical stories, that of the good Samaritan and of the adulterous woman who the crowd wants to stone until Jesus writes, “Let him who is without sin cast the first stone.” The author has researched the era well, including facts about Jewish law and Roman customs.

Although Miriam’s opinion of Gaius changes a little too quickly from hated Roman to “dear Gaius,” several plot twists move the momentum of the story along nicely.

Unfortunately, the book needs a careful proofread to correct errors such as incorrect word use (“They made quite a raucous”); “you” vs. “your” issues (“He is taking you father’s place”), and incorrect punctuation.

Fans of Christian fiction who can overlook these errors, though, will surely enjoy this tale.