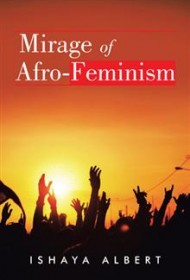 In Mirage of Afro-Feminism, Ishaya Albert offers a look at modern-day Lagos, Nigeria, and attempts to make points about feminism in Africa and around the world.

The back cover claims that the book is “a work that speaks against global indifference and irresoluteness in the plight of women and children…” It also briefly describes the characters. Dr. Hafsat, for example, is there to “show…the plight of women in society with an emphasis on the lack of respect for women…”

Yet it’s very hard to find evidence of this theme within the story itself, which is extremely difficult to follow. The narrative meanders, then changes focus without warning. As a result, the plot is difficult to summarize. After opening in an orphanage, the story moves in fits and starts to a women’s conference, then involves a road trip to find a man who made an exceptionally generous donation to the orphanage.

Lengthy speeches given at conferences are reproduced in their entirety. Like the story, the speeches are fiction, but they feel as if pulled from real life and reshaped to fit the narrative. Perhaps a larger problem is that readers never get a sense of the characters. They aren’t described visually, and with the exception of passages written in an African dialect, their voices are identical, making it hard to differentiate between them. Repetitive language (e.g. repeatedly calling the orphans “inmates”) and misused words (Dr. Hafsat “horned” her car at the gate) further distract.

While Albert’s stated goal is to make salient points about feminism in Africa, any specifics on the topic are in woefully short supply. Mirage of Afro-Feminism could be rewritten as a nonfiction manifesto that might make those points more clearly and succinctly.

There are moments here that recall Chimamanda Ngozi Adichie’s Americanah and its dry humor about life with a foot in two and sometimes three worlds. But overall, the story presents more challenges than rewards, and this Mirage remains illusory.