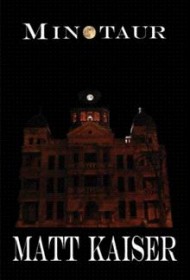 Take your standard Michael Crichton airport novel that warns of biotechnology run amok. Insert a bank-robbery subplot straight out of Heat, complete with a rogue’s gallery that includes characters named “Rat” and “Kill.” Where novelist Matt Kaiser’s lurid fantasy gets fantastic in every sense of the word is when it lurches headlong and unabashedly into a grotesquely uproarious take on body-snatching that gives the cult horror flick Reanimator a run for its money.

We first meet Dr. Chester “Chess” Korillian, a gifted surgeon who has pioneered spinal repair surgery. But Chess wants more, so he’s partnered up with Patrick “Rat” Steinbeck to pull off a ten million dollar heist. Meanwhile, Kaiser introduces black marketer Jack Todd, who’s running a lucrative business in human cloning. We discover his unique talents when Jack slips into his office and – amazingly – pulls his own brain out of his skull and inserts it into another body.

Thankfully, the book doesn’t dwell on its bizarre twist, taking it for granted that this illegal enterprise is a means to an end for the criminal set–the futuristic version of a ski mask, if you will. There are a few weird sidebars, like Jack rewiring his circuitry so he can have sex with himself, or Chess dropping Jack’s brain in a dolphin. But other plots, like transgendered Shay who finally becomes herself, are admirably altruistic.

If readers can get past Minotaur’s startling premise, they may find a thriller with a macabre spirit that elicits more perverse satisfaction than gasps.