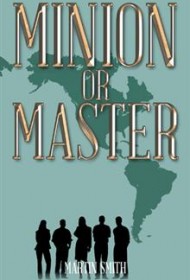 A thriller set in 1966, Minion or Master introduces readers to George Howden, a British accountant trying to make a name for himself by working for a firm in Bermuda. He has grand ideas of forming a new shipping company that will earn him a fortune, but naïve to the corrupt ways of Bermuda, he becomes implicated in a smuggling operation and must do anything he can to clear his name.

Minion or Master begins in the present day, with an elderly George Howden receiving a letter from the mysterious Adrian Cuthbert. This letter takes George back to their first meeting, and the novel is told in a flashback as George remembers his adventures with Adrian, including taking on those involved in smuggling, drugs and prostitution. While the narration sometimes jumps around, the story is easy enough to follow.

George’s exploits can seem a bit far-fetched, but if you can suspend your sense of disbelief, this is a fun romp of a novel, featuring a colorful cast of characters you won’t soon forget. Smith makes an extra effort to examine the imbalance within relationships in the story, taking a close look at the power dynamics, for example, between an FBI agent and his target, a pimp and his prostitute, a ship captain and his crew, and more.

Minion or Master is written in the present tense, but because the story takes place mostly in the past, this makes for an uncomfortable read; the use of present tense prevents readers from relaxing into the narrative. Additionally, the novel suffers from grammatical and punctuation errors (for example: “Absolutely fine by me no problem at all”). While the narration and grammar issues hamper the reading experience, the compelling plot makes for a story that thriller fans will likely enjoy.