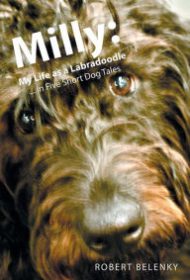 Milly: My Life as a Labradoodle … in Five Short Dog Tales is Robert Belenky’s fictional account of his real-life labradoodle, Milly.

Milly, an anthropomorphic character whose adventures unfold in Hanover, New Hampshire, uses spoken language and participates in human society. While the title indicates that Milly narrates her autobiography, the tales feature different narrative voices, and the last story, based on her canine grandmother, excludes Milly entirely.

An omniscient point of view begins the first tale, relating how Milly started life as an orphan and was adopted by her human parents, Mother Mary and Capt’n Bob. Milly then assumes the narrative, recounting her bittersweet puppyhood. Translated by Capt’n Bob “from the original language consisting of yips, barks, body wiggles, and tail wags,” the account neglects to explain Capt’n Bob’s magical ability to interpret dog language. Further confusing readers, Milly at one point declares that “[her parents] are not very good at understanding dog talk,” making their reported conversations suspect.

The second tale, in which Milly defends herself against charges of stealing tennis balls, ends with discussion questions for readers (“Does Milly really steal tennis balls?”). Since the other stories don’t include such questions, the approach seems jarring.

The third story, in which Milly seeks a “human puppy,” closes abruptly, asking “children viewers” to recommend the story’s ending. And the fourth tale infuses sociopolitical commentary when Milly espouses an anti-squirrel posture, echoing the nation’s political climate. Milly proclaims: Squirrels are “’a dangerous threat to our way of life… [We] shall build a giant wall…!’” Her attitude contradicts her characterization by Capt’n Bob as an “enlightened canine,” and the stance is inappropriate for a children’s book.

Overall, the book lacks the figurative language necessary to bring to life a make-believe world where animals live and talk like humans, and the odd and inconsistent treatment of each story makes for a disjointed reading experience. As a result, the book will likely have limited appeal for young audiences.