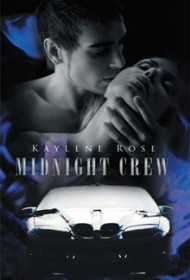 “What we…have is a bunch of young, vibrant young people out cruising and trying to have a good time and stay out of trouble…sort of,” Maritsa tells us. “Hey, we can’t help it when trouble comes our way. The only rules we do have is that you respect everyone, don’t start shit, pay for your own damn gas, keep up, and don’t rat us out to the police.”

Between the street races, backyard barbecues and bar fights, the ensemble cast reads as if  straight out of central casting for Vin Diesel’s next sequel. That said, Maritsa makes for a pretty audacious main character with her profane lingo, sexual abandon, and emotional roller coasters.

Readers should note that the book is chock-full of sex, presented in graphic, X-rated detail.  What it can’t find is a successful resolution. The author introduces a stalker that frequently threatens to rape Maritsa, but the storyline never concludes. Conversely, something terrible happens at the end of the novel, and it causes one of the two leads to completely change personality in a way that doesn’t make sense.  Ultimately, it reads somewhat like sexy Fast & Furious fan fiction from the point of view of Lefty Ortiz (Michelle Rodriguez), but the novel would be better overall if it stuck the landing.

Also available as an hardcover and ebook.