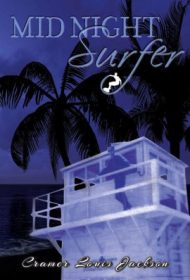 Friends Jim and Surfersam man a lifeguard tower, the latter making money on the side by offering surfing lessons. One day, a stunningly beautiful female client shows up, saying: “I am here for you to teach me to become the best woman surfer every [sic] and I have given myself my surfer name is Saltwatersally.” Later that day, after witnessing Surfersam save a family when a boat overturns, Saltwatersally kisses him passionately in front of the crowd gathered on the beach.

Their initial surfing lesson is then filled with mishaps, including Saltwatersally losing her bikini. Surfersam drives her home, where he’s flattered to see a picture of himself with his board on her wall and gladly accepts her invitation to shower with her. The pair become inseparable and famous for Surfersam’s lifeguard heroics, Saltwatersally’s passionate displays of affection and their surfing skills—until tragedy strikes.

While told in earnest, Jackson’s story is highly unpolished. Dialogue is stilted, lacking authenticity (Saltwatersally to Jim: “It’s kind of wonderful that you want to be helpful to the people that are very important in our life and we will be friends for life.” Jim: “That is very nice of you to think of doing that but I don’t think my Freon say [sic: fiancé] would want that”).

Writing errors, including poor spelling, abound, making the story difficult to read from its opening line: “In one of days in the 50ths, there is a nice on shore breeze that help cool down the hot sand that beach goers so that some that it would be bearable to walk to the ocean and that would mean there would be many people a lot of work for the lifeguards.”