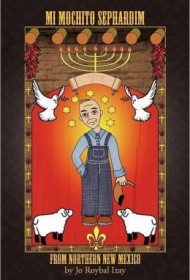 Written as a series of connected vignettes, Mi Mochito Sephardim tells the story of a sprawling family of Sephardic Jews living in northern New Mexico, where their ancestors went to escape the Inquisition. The family has taken in El Mochito, a charming, if batty, man whose many transgressions are explained away as the acts of “un inocente.” He helps the children with their schoolwork, confusing and combining Christopher Columbus and Saint Christopher with the story of the Boston Tea Party. He calls the holiday Rosh Hashana “rosa y rana” (rose and frog). And he’s only one of the vivid characters bringing this book to life.

Author Jo Roybal Izay grew up in the region where these stories are set and beautifully brings the landscape to life. Telling the stories from young Yisraela’s point of view lets us first see things through her eyes, then sift through her telling of the story to see the adult reality behind her perception. The book includes lengthy passages of idiomatic Spanish, but what isn’t immediately understood or translated is thankfully decoded in a lengthy glossary.

For a book packed with funny and poignant stories, Mi Mochito Sephardim manages to impart a generous lesson in New Mexico history that many people will be discovering for the first time. The mix of faith traditions and a willingness to compromise and get along (up to a point) is itself illuminating. Izay knows her history well, and that allows her to get it across without the book ever feeling weighted down by information. Instead, it’s a fine romp through the life and times of a large, loving family.

BlueInk Heads-Up: This should be of interest to Southwestern US residents and Sephardic Jews, as well as anyone who wouldn’t automatically associate those two groups with one another!