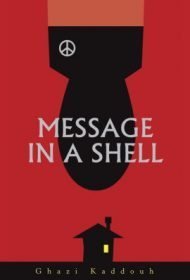 Ghazi Kaddouh lived in Lebanon and experienced the period of chaos and lawlessness that he writes about in Message in a Shell.

The novel—part crime story, part spy thriller, with a liberal dose of romance—revolves around Sami Badroni, a Shia Muslim trying to avoid the socio-political and religious cross-currents ripping apart the Middle East in the 1980s. Instead, he takes advantage of the opportunities available and is an up-and-coming drug smuggler.

He and his friends live a somewhat carefree life, despite the occasional sniper attacks, random shelling and air strikes that have decimated much of Lebanon. Competing forces fight in the country: Lebanese, Palestinians, Israelis, Americans and French. The three great religions drive the strikes: Muslims, Jews and Christians.

The novel follows Sami’s journey through this minefield of allegiances and double-crosses, where the authorities can be bought and your allies might become your enemies. Sami is framed for the murder of Israeli spies in London, and when Mossad isn’t trying to kill him, treacherous gangsters are after him.

Kaddouh describes the daily lives of the Lebanese in sharp detail: “The streets were jammed with cars filled with people attempting to escape the slaughter. [Planes flew above], their robotic pilots pressing buttons to send their gifts of death to the masses below. Not a single one of those God-fearing aviators glimpsed the faces of the people they were murdering. So what if five hundred Lebanese and Palestinian people burned in one single day?”

Because Kaddouh knows the setting first-hand, his crisp prose authentically captures the era. His dialogue is natural, whether involving friendly banter or terse exchanges between adversaries, and the plot moves briskly. While the romantic relationships often seem artificial and underdeveloped, the emotional gaps are easily overlooked.

Although written from a Lebanese perspective, Message in a Shell isn’t particularly political. As it chronicles the brutality and corruption of war, it offers a view of the Middle East most readers haven’t seen and should find interesting.