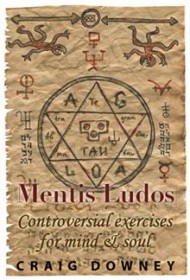 In Mentis Ludos: Controversial Exercises for Mind and Soul, author Craig Downey invites readers to participate in thought experiments meant to provoke deep analysis of the human condition and the universe itself.

Divided into dozens of short essays, Mentis Ludos tackles topics ranging from the desire for supernatural mystery, to intrinsic differences between the genders, self-perfection, the nature of intelligence, the role of fear in entertainment, the possibility of extraterrestrial life, and the design of the universe. Ambitious in scope, the subjects are tied together only loosely by a tutorial in the introduction regarding different approaches to thinking and solving problems (e.g. lateral vs. vertical thinking).

The expansiveness of Mentis Ludos is sometimes a detraction, as important topics don’t always get the depth they deserve (by contrast, minor ideas can receive pages of coverage.) The author’s style is idiosyncratic, and he has a tendency to ramble — sometimes taking readers in new directions entirely at the end of an essay. For instance, one essay begins by noting alleged differences between men’s and women’s perceptions of horror films and ends by extolling the virtue of the horror genre in general. The overall point is never quite clear.

Although Mentis Ludos promises controversy (the author notes his concern about offending readers in several places), the topics aren’t in themselves offensive, and aren’t likely to generate heated debate. Also, Downey spends much time apologizing to readers — and specifically to female readers — just before launching into material that’s even remotely technical. The implication is that women are likely to be put off by a technical discussion, or ill-equipped to follow it.

Mentis Ludos is fond of asserting its own definitions of intelligence (it even includes a quiz intended to measure its brand of intellect). While it seems written to be accessible to a general audience, the topics will most appeal to philosophy students. Unfortunately, Mentis Ludos too often insults the intelligence of the very readers it might hope to attract.