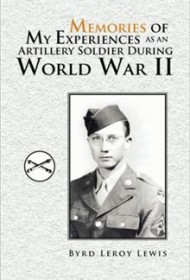 War memoirs usually tell of battles won or lost, of hardships endured, of intense moments of heroism and panic, of suffering and raw humor and, of course, of death. Not so much here, for although Byrd Leroy Lewis’ recollections of fighting across Europe during World War II contain all these elements, none predominate. Instead, he focuses on the everyday slog of war, the long periods of routine interrupted occasionally by anxious flashes of high tension.

Beginning with training as a member of a field artillery unit in Texas, Lewis constructs his memoir as a largely chronological series of short chapters that takes him first on a stomach-churning convoy to England, then to the Normandy beaches barely a month after D-Day and from there on a wild ride across France and into Germany as part of the US 3rd Army. As the radio operator for the commander of a 105mm howitzer battery, he was close enough to the front to crawl beneath the “zip, zip, zip” of enemy bullets, be strafed from the air, smell burned flesh and have his unit cut off by German tanks.

Since he and his own father, a World War I veteran, were never able to share battlefield experiences, Lewis originally set down these memories for his grandsons, to answer questions that might not even have occurred to them yet. For the rest of us, the book’s appeal comes from its portrayal of the regular, unheroic grind of battle as endured by this average soldier and his comrades. Though marred by occasional misspelled place names and a bizarre conclusion or two (for instance that some students are taught “the United States was the villain in World War II”), these recollections starkly illustrate the reality behind what became, after supporting a French armored division, the battery’s informal motto: “C’est la guerre.”