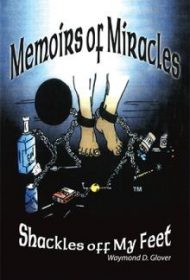 Waymond D. Glover’s autobiographical novel follows Ike Cole as he grows up in a rough neighborhood, turns to a life of crime and finds eventual redemption.

Memoirs of Miracles begins as Ike, paralyzed by addiction, hits rock bottom and, through prayer, survives 24 hours without relapsing. Glover then takes readers back to Ike’s youth in the crime-ridden Kerry Street neighborhood. Although Ike and his best friend, Billy Ray, grow up in loving and upright homes, the neighborhood’s criminal element mesmerizes them.

A prominent drug dealer named Blue takes the young men under his wing. With two other friends, Ike and Billy Ray form a drug and stick-up crew and rise to notoriety. A devastating loss, however, thrusts Ike into addiction to crack and other substances that he struggles to overcome.

Memoirs of Miracles offers a powerful cautionary portrait of addiction’s toll. Ike has some repulsive actions on his conscience, including sexual assault and brutal beatings. Yet it’s hard not to sympathize with this man who has “slipped into darkness and can’t see the light” and be heartened by his triumphs. This ability to arouse such contradictory emotions in readers is a testament to Glover’s talent.

On the other hand, the writing quality is inconsistent enough to compromise the novel’s readability. The work contains powerful, sometimes funny, passages. For instance, the denizens of a neighborhood poolroom “go in and order a shot, they shoot dice, they shoot the breeze, they shoot each other, but they rarely shoot pool.”  But it also includes a plethora of run-on sentences and typos, some of which add unintentional humor at inappropriate moments (e.g., the protagonist “messaging” his lover’s clitoris).

Overall, Memoirs of Miracles needs significant editing before it’s likely to appeal to a general audience. With revision, however, it could become a powerful piece of “street lit” akin to the works of Donald Goines and Iceberg Slim.