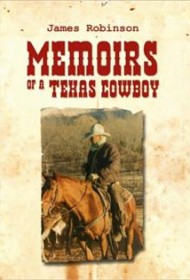 For nearly 40 years, James Robinson worked as a cowboy and rancher in the southern Texas Panhandle. From the age of six–when he received his first, brand-new riding saddle and helped his father gather cattle for one of the largest ranches in the county–Robinson knew that all he ever wanted to be was a cowboy. Whether he was vaccinating 100 head of cattle against deadly contagious diseases; calving 120 to 150 heifers a year; striking out in the blowing snow to provide water to his cattle; or gathering 3,000 cows, calves, and bulls into pens and onto trucks to ship them off for sale, Robinson’s ranching was a deeply cherished way of life.

Robinson gathers his reminiscences of those gratifying days in this publication, which is more of a booklet or hastily drawn set of diary entries than it is a measured, organized, and well-penned memoir. At 53 pages, there isn’t space for setting scenes or character backstory. Such brevity doesn’t allow the author to show the conflicts and rewards of life’s many milestones, or to dramatize the emotions that inspire a story into being–all of which are essential elements of the genre. Instead, Robinson reiterates his exploits in disjointed chapters without clear-cut transitions, regard for chronology, or consistent word usage.

There is a discernible and compelling reason why Robinson jotted down his memories. But it isn’t revealed until the end, and unfortunately, it doesn’t elicit the impact that it could have if it had been incorporated earlier into Robinson’s chronicle.