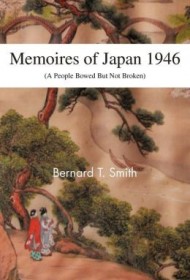 At the close of World War II, British soldier Bernard T. Smith, 23 years old, faced a choice. After his war service in India and Burma he could return to England and re-enter civilian life. Or he could volunteer for what would probably be a short tour of duty in Japan, as the victorious Allied military forces helped the vanquished Asians climb out of the rubble.

Smith volunteered to serve in Japan. He wrote in a diary for some of the seven months he remained. His mostly positive experiences have stuck with him throughout his life, but he probably never would have written a book about that stretch of 1946 without the diary he rediscovered late in life. This book is based mostly on the diary entries, supplemented occasionally by Smith’s unwritten memories.

Most of Smith’s military duty occurred in the city of Iwakuni, on the scenic east coast of Japan’s inland sea. He never ceased to marvel at the natural beauty and lack of overt bitterness among the Japanese people he met both on and off the military base. Smith seems to be an open-minded, generous individual interested in learning a new language and customs. He established relationships within the civilian population that lasted decades.

The memoir’s joyous spirit is leavened by the destruction Smith witnessed first hand in Hiroshima, a short drive from Iwakuni. The atomic bomb dropped on Hiroshima leveled most of the city, causing hundreds of thousands of deaths and severe injuries. Smith is wise to include his views of the carnage—he subtly disagrees with the decision to employ the bomb—and just as wise to place that carnage secondary to the post-war joy he helped spread.

Smith writes well, although the book is hampered by inappropriate comma usages that distract from the narrative’s flow. His story will appeal to readers interested in World War II, generally, and more specifically in how the Japanese population rebounded so remarkably.