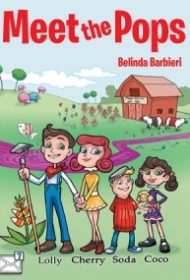 Coco Pop is excited for Show-and-Tell, since she’s bringing her favorite doll to school. Soda Pop, whom the Pops adopted over the summer, is nervous about joining his new sister’s class for the first time. Soda has a lonely first few minutes in the cafeteria, but when he finds candy corn in his lunchbox, all the other kids want to befriend him. Meanwhile, Coco loses her doll on the playground, and her father must go search for it.

At the end of the story, the narrative discusses the lessons the children have learned: that sharing generates friends and that it’s important to look after your treasures.

This story is most immersive when describing its candy-laden world, and the book’s colorful, cartoonlike illustrations complement this imaginative setting. There are sugar-sweet streams and lollipop trees and chickens laying marshmallows rather than eggs.

However, although described in great detail, this backdrop barely impacts the children’s adventures. Instead, their stories are straightforward lessons in friendship and responsibility that take place in an unremarkable elementary school; the lushly described world and multiple pages explaining the family business and annual lollipop harvest introduce concepts that aren’t reincorporated into the plot and, thus, feel oddly irrelevant.

Furthermore, while Soda decides to follow his father’s advice and share his treat, Coco despairs rather than helping to look for her doll. This adult-driven solution muddies the story’s lesson about responsibility.

Text messages from the various Pops appear throughout the story and define complex concepts or vocabulary like “unique” and “inseparable.” This is a clever way to introduce harder words, though many equally difficult terms, including “property” and “secured,” are not defined.

The book features an entertaining setting and sympathetic characters, but due to the flaws mentioned, Meet the Pops falls short in delivering on its full potential.