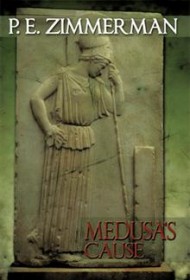 Events are set in motion when a beautiful young woman is compelled to join a mysterious man at the temple of Athena in the middle of the night. A dedicated virgin, she nevertheless gives in to her passion for the extraordinary man — who is actually the god Poseidon — despite the sacrilege of making love in the virgin goddess’s sanctuary. This act has terrible consequences for the young woman; Athena punishes her by transforming her into a monster — the famous mythological creature, Medusa.

When Medusa’s two sisters discover she is missing, they go on a journey to try to find her. They have extremely different natures: Sthenno, the oldest, is athletic, drinks, and has sworn off men in response to the misogyny she has witnessed all her life. Euryale, the youngest, has been plagued by visions since childhood and is far more romantic. They encounter obstacles not just in what they face in their travels, but also with each other. Once they find Medusa, they care for her as long as she lives. After she dies, they continue in heroic fashion to rescue her soul.

More rigorous editing would have strengthened the book; not only by correcting errors in punctuation, vocabulary, and syntax, but also by ensuring some loose ends are resolved and, more important, by trimming repetitions. The author often says the same thing several different ways, and overuses certain words: “seemed” and “seemingly” appear multiple times in single paragraphs, for example.

However, readers with a strong interest in mythology and ancient Greece will most likely overlook these issues and become engrossed in the unfolding of the complex and ultimately satisfying story.