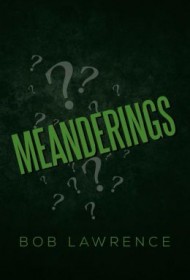 Meanderings, by Bob Lawrence, is a well-organized collection of Christian poems by a retired minister. On the book’s back cover, Lawrence writes that he has tried to capture the “grassroots consensus” on “religious, social, political, and moral issues.”

Lawrence’s style is very consistent: All poems are one or two pages, centered on the page, and all in the same font. This gives the book a clean and orderly appearance.

Many of the pieces are patriotic, such as “Who’s Running America??” which also has an urgency to it, as indicated by the double question marks. The narrator challenges the reader to consider the source of authority in America: “Is it God or is it Satan? / It’s one of the two. / That’s making our country / Look like a zoo.” The poem goes on to protest abortion and same-sex marriage, two hot-button issues of the evangelical Christian community.

Lawrence is fond of directly addressing the reader in a fatherly tone, which may be from his work as a minister. One poem, “Who/What Am I?” discusses evolution and the choice to believe in “a personal Maker”; it employs a clever metaphor and simple-but-fresh rhyme to draw the reader into this argument, “One who put me together / Every tissue and sinew / And anything else / That came on the menu!”

While the book offers similar high points from time to time, overall, the collection is undistinguished. The poems lack detail and fresh figurative language, and there is little attention paid to musicality other than the predictable end rhymes. The types of imagery are limited and too often rely on clichés (“My sweetheart, my lover, my spouse—the apple of my eye”).

Although the book does not feel like a fresh find for those reasons, its themes may appeal to readers with conservative Christian values.