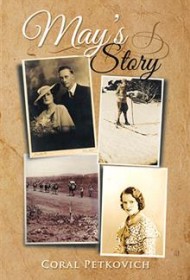 May Watson was born in Australia in 1908 to a gold miner father and a mother who “had been taught to make the most of things.” She went on to live a long life as a wife, mother, grandmother, great-grandmother and widow before dying at 101, “a typical Anglo-Saxon woman of her time.”

Her daughter, Coral Petkovich, wrote May’s Story to preserve “a way of life now lost to memory…” But while the Australian landscape makes for a lively backdrop at times, at the book’s heart is the complex love between a controlling mother and a free-spirited daughter. And it’s there, in that timeless pas de deux, that its subtle rewards can be found.

May is a woman of strong opinions and myriad worries. Few go unspoken. Much of her disapproval is directed at Coral, renamed Clair in the book. May reads her diary and spies on her dates. “She would look through the window and see them mauling her daughter—that was how she thought of it, even though in reality she had seen nothing more than hugs and kisses.” When 20-year-old unmarried Clair becomes pregnant by a young Croatian man, May’s worst fears are realized. “It’s all so different from what May had hoped for and planned for and expected. It wasn’t fair.”

For all their friction, there’s no questioning their love and devotion over the decades, as May and Clair travel, celebrate, and mourn together.

At times, May’s Story suffers from uneven pacing, such as a sightseeing trip to Europe that spans 25 pages. But Petkovich’s flawless, straightforward prose keeps the focus on the characters, where it belongs, and the author has a wonderful eye for details that bring scenes alive.

For the patient reader, there are considerable rewards here, measurable in family dynamics that are unmistakably – deliciously – universal.