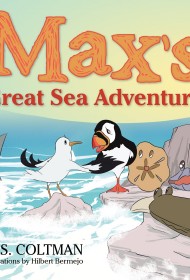 In Max’s Great Sea Adventure, author G.S. Coltman tells the tale of Max, a sandpiper who can’t yet fly and is washed out to sea.

His tail feathers not yet grown, sandpiper Max is sick of being treated as a baby, and after ignoring his father’s advice to be cautious in the ocean, he is swept out to a rocky outcropping. There, he meets several seabirds and ocean creatures, who all agree to help him get back home. During their efforts, Max remembers other advice from his father and puts it to use swimming past a shark before finally returning home. Max’s adventure matures him, and at the story’s end, he notices that his tail feathers have finally come in.

Coltman’s story makes for a pleasant coming-of-age narrative, as Max faces adversity and triumphs over it. The book’s chapters are very short, most only a single page. Some sentences are overstuffed and awkward, however, and could have been pared down for easier reading; for example: ”He knew the rock caves were where nothing ever came back from as the heavy surf crashed onto the rocks, sending foam high into the air.”

It seems strange that with a puffin and two pelicans among Max’s new friends, there is no attempt to simply pick Max up and fly him back to shore. After all, Max first meets Pete the Puffin when Pete grabs Max by his tail feathers and lifts him out of the water and away from a dangerous wave; perhaps the distance to shore is too great for puffin or pelican to carry another bird, but there’s no explanation provided.

The eight color illustrations scattered throughout Max’s Great Sea Adventure are engaging, and the book would have benefited from more of them, as the narrative offers descriptions that go on at length, and an illustration on every other page might have added clarity and broken up the text-heavy look of the book.

Despite all, the story offers a nice message and should hold some interest for its young audience.