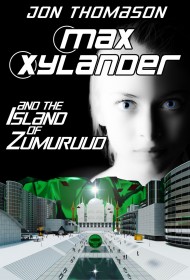 Jon Thomason’s debut is a young adult story in which 13-year-old Max Xylander accidentally discovers she has magical powers.

Angry with a fellow student, Max unleashes a fireball of rage and explodes a school window. Amazed and relieved that the shards of glass don’t seriously injure the boy, she begins experimenting by playing tricks on her friends. Soon, Max learns that she is a jinni (genie) — a unique one, to boot. While other jinn must depend on magic rings for their powers, Max has never owned a ring. Aware of Max, the jinn council invites her to spend the summer at a special camp on a secret island where she will learn to expand and control her powers.

Meanwhile, Philip Stylus gets his ring back after being banished from the island and relieved of his ring for two years for breaking jinn rules. Philip has his powers again, along with thoughts of revenge.

Max and Philip are bound to meet, and the neophyte teen mage will have to make a difficult decision with long-range consequences for both the magical and mundane worlds.

Thomason shines in his heroine’s characterization. Although basically good hearted, Max is frequently a bratty, self-centered teenager, as one would expect of a girl her age. Her relationships with her peers ring true. Some of the other characters, however, are more stereotypical: the obnoxious older sister, the overweight, inept roommate, and the evil magician, among others. And the jinn summer camp will seem derivative to anyone who has read seven books about Hogwarts.

The author fails to explain much about the jinn society: its history, how otherwise normal people become magical and where the magic rings come from. Perhaps he is saving that for future volumes.

Still, readers are bound to be curious about what will happen in Max’s future adventures. For the work of a debut novelist, that is magical in itself.