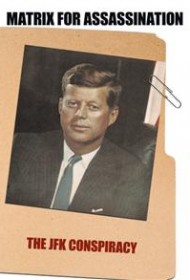 With the 50th anniversary of President Kennedy’s assassination approaching, the events of Nov. 22, 1963 in Dallas will again be in the media spotlight. And no recounting of Kennedy’s death can ignore the questions that linger a half-century later.

Richard Gilbride, a former chemist and graphics designer who was a Boston fourth-grader on the day of the assassination, has made Kennedy’s death a lifelong subject of study. His interest — perhaps even obsession — has resulted in Maxtrix For Assassination, a hefty book that takes various conspiracy theories and coalesces them into one.

The cast is not unfamiliar to those who have followed the case — the CIA, FBI, organized crime, Dallas Police Department and other governmental agencies have all been implicated in Kennedy’s death by conspiracy theorists. But Gilbride takes it up a notch, adding the military-industrial complex, Nazis, the Israeli government , and a shadowy group of men who, in effect, have run the U.S. for decades. At the heart of it all, he claims, was a need to cover up the fact that UFOs are real. Oh, and Marilyn Monroe’s death is also part of the story.

But don’t be quick to dismiss Matrix as conspiracy ramblings. Yes, Gilbride implicates a cast of hundreds — some 160 conspirators in the planning and execution of JFK’s killing, and another 240-plus involved in the cover-up. But as he lays it all out in nearly 400 pages of text supplemented by hundreds of photos, some of Gilbride’s evidence simply can’t be dismissed.

For example, he makes the case for two Oswalds: the public Oswald who was killed by Jack Ruby, and a shadow Oswald, a Russian-speaking double who was groomed for secret government work from the age of 12. Conflicting military, school and medical records — Oswald had his tonsils removed as a kid, yet years later was treated for tonsillitis in the military — seem to point to something fishy. Maybe even more remarkably, he also has uncovered a 1964 memo from CIA Director John McCone to Secret Service chief James Rowley in which McCone admits that Oswald had been trained by the CIA to penetrate Russia.

Does his theory hold water? It’s difficult to say. He does provide some interesting documentation, though the presentation of many photos and memos in the book is substandard. It would have been nice to have clearer reproduction. And by the nature of his theory, with hundreds of names and acronyms fired off at the reader, some sections can be very dense and the going difficult. But Gilbride has done his homework and has made an effort to tie up many of the loose ends that persist. Serious JFK assassination buffs will appreciate his effort.