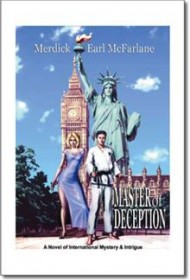 The action in the contemporary thriller Master of Deception spins from England to Manhattan, Mexico, Switzerland and the coast of Cuba, all in the name of vengeance.

The niece of David McAllister, a wealthy British barrister, is murdered in New York, and everyone believes that the man responsible for her death is Russian drug king and illegal arms dealer Victor Luchensko. But the police have no evidence against him, so McAllister enlists the aid of his butler and his American girlfriend, the wild and sexy Leah Hammond, to pursue Luchensko and bring him to one kind of justice or another for his crimes.

Despite the promising setup, the story lacks sufficient detail to fully engage the reader. The book seems more like a first draft, crafted from a packed outline and suffering badly from inattention to detail. For example, author Merdick Earl McFarlane places Hammond at the iconic disco Studio 54 in Manhattan but sets the story post-9/11, though the nightclub had closed several years before. More significantly, McFarlane never reveals how McAllister’s niece died or why the family and the police believe Luchensko was involved.

The author writes with enthusiasm and energy and obviously has some talent; Master of Deception offers some skilled moments. The introduction is playful and unconventional; a scene in which McAllister recalls fishing with his niece is genuinely touching; and a boat chase from Mexico to Guantanamo Bay is highly exciting. Overall, however, McFarlane took little care to get things right, sometimes using different names for the same characters. Too much happens too fast without explanation, which is likely to leave readers with many questions instead feeling satisfied with the conclusion.