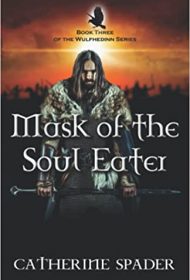 This third installment in Catherine Spader’s engrossing historical fantasy saga (begun with 2016’s Feast of the Raven) continues the effortlessly readable narrative featuring outsider Gerwulf—offspring of a Frankish woman who was raped by a Saxon demon wolf warrior called Wulfhedinn—and his journey to find his place in a bloody and politically unstable world.

Set in 782 AD, the story begins with Frankish King Karl (aka the legendary Charlemagne) and his army devastating entire regions of Saxony. After capturing more than 4,000 Saxon soldiers—and even a few Wulfheddinn warriors—who surrendered after the king promised clemency, Karl does the unthinkable and beheads them all. With the pack of wolf warriors depleted and their magic seemingly gone, Gerwulf realizes that little stands in Karl’s way of effectively eradicating the Saxon way of life and destroying their gods.

Gerwulf’s friend Brother Pyttel—a Christian monk who secretly embraces the old ways—works as the king’s advisor and tries to save Gerwulf’s life by manipulating the king using God’s word. Gerwulf, meanwhile, attempts to locate Vala, a mortal woman whose life has been pledged to the Walkyrie, a mythical handmaiden that Christians call the Eater of Souls because she collects spirits of the newly dead. Gerwulf struggles to locate Vala, who is pregnant with his child, before the world goes up in flames.

The story offers deep character development; even secondary characters like Theoderic, the king’s brutal general, come alive here. The richly described world-building is immersive, and the author’s focus on relentless action makes the novel hard to put down. Lastly, Spader does a masterful job blending supernatural elements into the historical setting: “I bared my fangs, howling with a savage drive to kill him. I needed to feel my jaws tear his flesh, and my claws ached to crush his bones.”

Fans of historical fiction and folkloric fantasy will find this blood-splattered and magic-soaked series highly entertaining—wolfskin and battle axe not included.