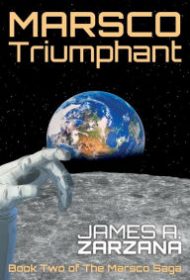 The second installment of James A. Zarzana’s Marsco saga (following 2015’s The Marsco Dissident) continues the epic science fiction chronicle of humankind’s near future, where one all-powerful corporation, Marsco, governs the entire human race. While not as forceful as its predecessor, this is a solid volume that adequately furthers the grand-scale story and its myriad unique, interesting characters.

Set in the late 21st century, the storyline revolves around the restoration of remnants of a fighting force that lost a war to Marsco decades earlier. Ingeniously hidden within the asteroid belt is the mythical “Ghost Fleet,” a massive force from the Continental Powers whose leaders and crew have been in cryostasis, awaiting the time when they can reawaken, defeat Marsco and regain control of the world. With oppressed masses across the planet also plotting rebellion – the vast majority of the populace lives in squalor in “unincorporated zones” – the (slightly unhinged) leader of the C-Powers force, armed with hundreds of nuclear weapons, prepares for Armageddon.

The overarching storyline is adeptly explored and propelled through a variety of intimate character threads, particularly Lieutenant Peter Rivers, a Marsco officer bent on finding the rebels who killed his mentor; Anthony “Zot” Grizotti, a disillusioned Marsco associate who resigns and embarks on a dangerous journey of self-discovery; and Walter Miller, the famed dissident and spaceship designer from the first novel who is attempting to create a ship that can transport the first humans out of the solar system.

The novel suffers from middle-book syndrome, with no impactful beginning or satisfying conclusion. Also, some of the narrative aspects that powered the first novel are more muted, such as the focus on visionary and highly detailed world-building. Still, the action and pacing are markedly stronger, and tonally, this story has a Golden Age feel, reminiscent of works by masters such as Arthur C. Clarke, Robert A. Heinlein and Poul Anderson.

For science fiction fans, this is a series not to be missed.