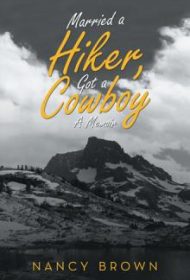 Nancy Brown is a professional photographer, teacher, mother and wife, but her love of the outdoors is what defines her. Married a Hiker, Got a Cowboy relates a lifetime of adventures hiking, camping, paddling and riding on the trails, mountains, and rivers of the Sierra Nevada and the western United States.

Brown recalls her childhood living in Mill Valley, California, in the 1940’s and 50’s, playing outdoors and participating in family camping vacations. She married a “hiker” at age 21. The marriage ended in divorce, and she married twice thereafter, now living with her “cowboy” husband of 29 years.

The author roamed the West, often driving an iconic VW bus.  She was a fit and skilled hiker who explored an impressive array of backcountry areas.  Later in life, the canoe became her vehicle for adventure, and more recently she views nature from atop a mule. Brown often used the natural environment as a subject for photography.

Interestingly, the author had several brushes with fame, having met Chief Justice William O. Douglas, author Edward Abbey (who became a friend), photographer Ansel Adams, and incredibly, encountered members of the Manson Family on a hike in Death Valley.

Brown’s writing style is direct. She admits mistakes with self-effacing humor, and her honest tone makes her relatable. Unfortunately, the memoir provides few glimpses into her motivations or emotions and disappointingly features only one of her nature photographs (numerous images of family members appear instead).

Additionally, the memoir seems to lack focus. Brown presents too many details, such as the names of some friends and addresses of her previous residences, that are unimportant to the story. Conversely, accounts of her backcountry experiences often offer only a trek’s location with little descriptive information, which is likely to disappoint outdoor enthusiasts.

The author states that she’s “happy to pass on the story to my grandchildren.” She has accomplished this goal admirably. However, the book may have limited appeal for a wider audience.