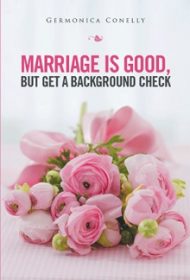 With its ironically romantic cover featuring a lush bridal bouquet, Marriage Is Good, but Get a Background Check appears to offer up a similar bounty of information. But the pithy title is misleading. This isn’t really a self-help book about marriage, but rather a recounting of author Germonica Conelly’s relationship with the man she married twice, once at age 17 and again at 57.

The book is primarily written as a journal (with the exception of Chapter One, which provides an overview of the author’s history with Barry, “a statuesque, tall, dark and handsome young man”). Shortly after her first nuptials, Conelly learns that Barry had been wed previously. But even that knowledge, along with his abusive behavior toward her when she was pregnant with their son Tyrese, failed to stop their remarriage decades later—even though Tyrese had warned her about Barry’s multiple in-between marriages. Conelly was convinced Barry had reformed, and the rest of the diary illustrates the unraveling of that misconception.

Even the most intimate writing requires some emotional distance, but Conelly’s book reads as if she’s settling a score. It’s peppered with excessive underlining, bolding and side comments, just in case readers fail to draw their own conclusions about her ne’er-do-well ex and his 12-plus marriages.

The book also alternates between time periods and is filled with irrelevant details. For example, one entry talks about Barry’s cooking skills, flashes back to what they ate while her sister and husband stopped by from Florida, then discusses a reciprocal visit in which she had to pay for a hotel because Barry didn’t want to stay with her relatives…and so on. This pattern buries any narrative arc and eschews insights that might help readers avoid the same mistakes.

Perhaps rewriting the book in the vein of Chapter One, which recounts events in a more organized and objective manner, might help provide a clearer focus. As is, readers will find this a challenging narrative to navigate.