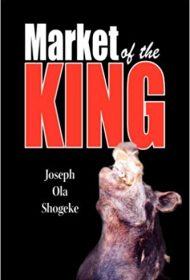 Joseph Ola Shogeke lovingly sketches stories of his childhood in Kajawla, western Nigeria, in this memoir.

The book begins in 1948, when he’s five and ends when he’s eight. He narrates throughout like a wide-eyed child. But his account also reflects an adult’s awareness of how Yoruba tribal culture coexisted with British colonial rule, and traditional voodoo practices coexisted with Christian and Muslim rituals.

Each chapter feels like an often-told yarn, full of colorful characters, humor, conflict, resolution, and abundant magic (some disturbing, as when Joseph woke at night to “see” a malevolent witch’s human-faced cat kill his twin, infant cousins). Shogeke’s storytelling relies on dialogue, not description. And his frequent use of African words enriches the story, but can be confusing, despite inclusion of a brief glossary (for example, Eko, Oku Asun, Ogboni, Ofin Owo Ori, and Owo Eyo).

In one typical story, Joseph’s uncle, Ladega, a witch doctor and village Chief, is asked to help an infertile woman. Joseph spies on the ceremony and reports back to his friends how a coconut hung over the woman cracked mysteriously as Ladega recited incantations. In another, Joseph’s cousin Arewa shaves the head of a sleeping white teacher in order to sell the hair to witch doctors at the famous Market of the King.

Shogeke’s written English is uneven, as when he repeatedly has characters “smirking” and “sneering” when “smiling” seems more appropriate in context. English idioms abound, such as “A friend in need is a friend indeed,” causing one to wonder if Nigerians actually spoke that way in 1948 or if the author’s subsequent experiences color his memory. (Shogeke moved to the United States for school in 1969, and first published this book in 1978.)

While the memoir is a valuable and welcome account of mid-century tribal life in rural Africa, it’s appeal will likely be limited to readers already familiar with African oral tradition or willing to be patient with the text.