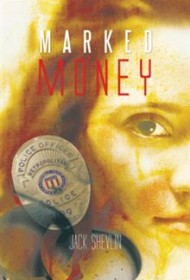 One of the reasons we read mysteries, aside from the who-done-it aspect, is that they put the narrative’s characters on a moral stage. We, as readers, watch how the victims, detectives, and bystanders react to the crime, and we make judgments about their responses. It’s a way we have of defining our own parameters, of deciding what is ignoble, noble, or acceptable in certain circumstances.

Jack Shevlin has a keen sense of the mystery as moral barometer, and, in his Marked Money, gives us a cast of characters who descend, in varying degrees, down a steep slope of self interest, self justification, and perfidy. Take, for instance, Kevin Sanderson, the father of a 17-year-old girl who has gone missing. Kevin justifies hiring thugs to beat up a suspect because, “a little rough stuff here isn’t wrong,” if it will help him find his daughter. Take, for instance, the girl’s mother, who interviews her daughter’s friends in an attempt to shift the blame for what may have happened to her daughter, from herself to her husband. Take for instance, the FBI, which allows an innocent man to be arrested because it doesn’t want the real perpetrator to be tipped off. And then there are the hardened criminals who lure teenagers to a life of prostitution with promises of a movie career….

In addition to this examination of ethics, Shevlin does what mystery writers do best. He creates a page-turner with a well-constructed plot and sub-plots that leave the reader guessing. The one area where Shevlin falls short is in the full realization of his characters. Aside from a vibrant depiction of an elderly Russian couple, most of Shevlin’s characters lack the little details and quirks that would make them real for us. With a little rewriting to flesh things out, however, this novel could enter the mainstream list of mysteries.