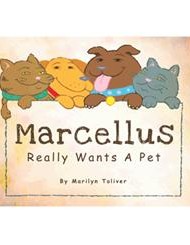 Preschool-age Marcellus longs to keep a pet at the house of his Grandma, author Marilyn Toliver. But Grandma doesn’t want to clean up after one or feed one. “Who will do all of that?” asks Grandma. “Not me. Taking care of a pet is a big responsibility.”

So begins this picture book that Toliver made with her grandson Marcellus. Illustrated with photographs, it takes readers through the pair’s decision to care for a pet and the steps needed to accomplish the job.

First, Marcellus suggests a pet that he says won’t make a mess or need store-bought food. “What on earth could this pet be?” Grandma wonders, turning around to see Marcellus proudly holding a bug. “Oh no!” Grandma exclaims, as she ushers Marcellus to the trash to throw it away. “Your idea is very clever, but a bug can never be a pet. No, not ever!”

Then one day Grandma’s friend offers to give Marcellus a parakeet and Grandma softens. Perhaps she can handle a pet that stays in a cage and only chirps and drops seeds and feathers. Over the rest of the book, Toliver shows Marcellus helping her clean the feeding dish and cage tray, and giving the bird water and food.

While warm-hearted, Toliver’s book lacks the sophistication of mass-marketed books. Photographs are snapshot quality and at times out of focus or hastily composed, and the book’s cover design (an illustration) is inconsistent with interior art (all photos). In addition, the narrative switches to a rhyme mid book, which is appealing but doesn’t tie in with her earlier style.

Still, the book is meant to be homemade, and its sincerity is charming; readers will appreciate the work Toliver and her grandson put into making it. In a foreword, Toliver writes that she wants to inspire others to create books with their grandchildren; if her book is marketed as such, it could do just that.